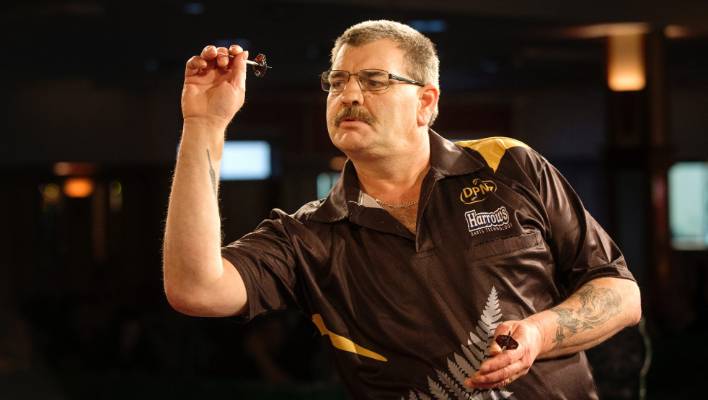 Josh Walters and Gary Boyland battled it out leg for leg in their first knockout match with Josh getting the break and the victory winning 4 legs to 2.

In the top 16 round the very talented 15 year old Jack Sheppard was methodical in his victory of 4 legs to 1 over Dean Reyland who won the Pro Tour 1 Consolation round.

Jimmy Samuels played Mark Cleaver and was up 3 legs to nil. Mark Cleaver come back and won a leg. But Jimmy was just too good taking the match 4 legs to 1.

Great match between Haupai Puha and Stu Irwin, Stu went three legs up, Haupai came back at him winning two legs in a row. Stu came back taking the match 4 legs to 2.

Mike O’Grady had a tight match against young Ihaka Kaio-Wynyard, winning 4 legs to 3.

The Top 8 was full of all ages with some great match ups.

Ben Robb played Emilio Hovell losing only one leg taking out the match 5 legs to 1.

Jimmy Samuels played Stu Irwin which started in a leg for leg battle, but Jimmy was just too good taking out the match 5 legs to 2.

Semi Final time Ben Robb took on fell Cantabrian Landon Gardiner. The match started off with both players winning a leg each. Ben went up 4 legs to 1. With Landon coming back winning two legs in a row, making the score 4 leg to 3. Ben found his groove again and came back with the score moving to 6 legs to 3 and Ben taking out the match.

Warren Parry took on Jimmy Samuels in the second semi-final. Jimmy took out the first two legs, but Warren came back winning the next 6 legs. Warren took out the match in spectacular fashion winning 6 legs to 2.

Finals time and it was World Cup team mates Ben Robb and Warren Parry playing each other. Warren took out the first leg with a bull finish. Leg two and Warren Parry scored high throughout the leg, eventually taking it out leading 2 legs to nil.

Warren was again too good winning the third leg. Ben was just unable to find his demanding form in the beginning of the match. After both missing doubles to take the leg Ben had a second chance and took it.

Warren Parry took out the game set and match with a 94 finish. Warren won 7 legs to 5. The best Warren has played all day.

Good Luck to both Warren Parry and Ben Robb on their travel to Frankfurt, Germany to represent New Zealand in the World Cup of Darts.