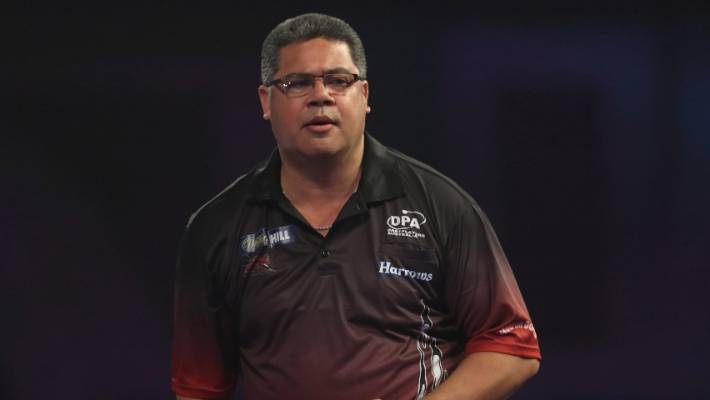 The two semi finals were very different affairs with Robb securing a fairly comfortable 6-2 win. Robb started strongly with the first three legs. In the fourth both he and Tewhakaara started with 180s but Robb failed to take a leg for the first time in the match. Robb then took the next two legs to move to within one of the match. Tewhakaara held out in the seventh leg before Robb completed the job to win 6-2.

In contrast Smith and TeKira went to a deciding leg with Smith taking it to win 6-5. Aj Te Kira took the first two legs and then Bernie Smith took the next two legs. After eight legs the match was 4-4 and this was then turned to 5-5 before Smith won the deciding leg, and the match 6 legs to 5.

The final was another close affair and having already survived a deciding leg Smith got through another in the semi final it was the Kiwi veteran who took out the match and made it to the stage at Hamilton. Smith took the first leg out comfortably and despite strong throwing from Robb it was Smith who came away with leg two. Leg three saw maximums from each player and Robb taking the leg. Leg Four went to Smith (helped by a 140 and 125 visit) whilst leg five went to Robb. In the final leg Robb threw 140, 180, 100, 46 and Smith 140, 60, 121, 125, with Robb taking out 55.

40 Entrants fronted up to try and qualify to take out the first NZ spot on the PDC stage in Hamilton on 26th August 2022.

25 Players qualified for Knockout Play, with a top class field in action.

Huge upset when Mark Cleaver put out Haupai Puha. Mark taking out the final leg on a 98 finish winning 4 to 2.

Another close match with Bernie Smith taking the win over Lance Odgers 4 legs to 3.

Kayden Milne was methodical in his defeat of Alan Skayman winning 4 legs to 1.

The Top 8 was a great mix of talent young, old and new.

The experience of Bernie Smith won through defeating youth player Kayden Milne 5 legs to 2. Both scored consistently well, but Bernie was just too good.

John Hurring and Hipi Tewhakaara was a leg for leg battle throughout with Hipi the victor in a very tight match 5 legs to 4.

Ben Robb was methodical in his defeat of Stu Irwin winning 5 legs to 2.

AJ Te Kira was cool calm and collected with his defeat of Peter Eccles winning 5 legs to 1.

Semi Final time and Ben Robb played Hipi Tewhakaara. Ben took out both of the first three legs, In the fourth leg both Ben and Hipi scored 180’s to start off with Hipi taking out the leg. Ben came back and took out legs 5 and 6, Hipi coming back taking out leg 7 and Ben then hammering it home to take out leg 8 and the match 6 legs to 2.

Bernie Smith played AJ Te Kira in semi-final two. AJ took out the first two legs then Bernie the next two, matching each other and battling it out leg for leg evening it up to 4 legs each. Such a tough battle with Bernie the eventual winner 6 legs to 5

Finals time and Ben Robb was up against Bernie Smith.

Bernie Smith is the first player to earn his place on stage in Hamilton on Friday 26th August 2022.